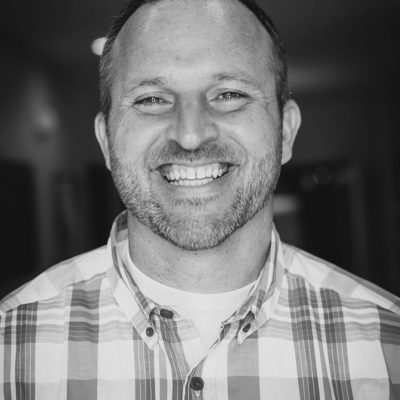 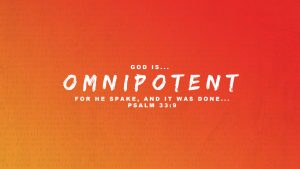 In the last two or three months, Charity and Cadence have learned to operate the television remote. Well, they know how to get to the three shows they watch. So as you can imagine, every day when the boys come home from school, there is a small skirmish for controller control. Even when the show has already been selected, they all want to hold the remote. I guess possessing the remote makes them feel powerful and “in control.” In reality, Jenni and I control what our children watch. I suppose you could say we are “omnipotent” when it comes to our television, but even as parents, we have no control over the electricity or what shows are on Amazon Prime. Just today, the girls asked for LEAP!, our favorite ballerina movie, but when I went to search for it, I discovered that LEAP! was from our streaming service. Even when it comes to my own T.V., I’m powerful but not omnipotent! Only God is all-powerful.

Defined: an agency or force of unlimited power https://www.merriam-webster.com/dictionary/omnipotence

Psalm 33:6-9 By the word of the LORD were the heavens made; and all the host of them by the breath of his mouth. He gathereth the waters of the sea together as an heap: he layeth up the depth in storehouses. 8 Let all the earth fear the LORD: let all the inhabitants of the world stand in awe of him. 9 For he spake, and it was done; he commanded, and it stood fast.

Psalm 104 Bless the LORD, O my soul. O LORD my God, thou art very great; thou art clothed with honour and majesty. 2 Who coverest thyself with light as with a garment: who stretchest out the heavens like a curtain: 3 Who layeth the beams of his chambers in the waters: who maketh the clouds his chariot: who walketh upon the wings of the wind: 4 Who maketh his angels spirits; his ministers a flaming fire: 5 Who laid the foundations of the earth, that it should not be removed for ever. 6 Thou coveredst it with the deep as with a garment: the waters stood above the mountains. 7 At thy rebuke they fled; at the voice of thy thunder they hasted away. 8 They go up by the mountains; they go down by the valleys unto the place which thou hast founded for them. 9 Thou hast set a bound that they may not pass over; that they turn not again to cover the earth. 10 He sendeth the springs into the valleys, which run among the hills. 11 They give drink to every beast of the field: the wild asses quench their thirst. 12 By them shall the fowls of the heaven have their habitation, which sing among the branches. 13 He watereth the hills from his chambers: the earth is satisfied with the fruit of thy works. 14 He causeth the grass to grow for the cattle, and herb for the service of man: that he may bring forth food out of the earth; 15 And wine that maketh glad the heart of man, and oil to make his face to shine, and bread which strengtheneth man’s heart. 16 The trees of the LORD are full of sap; the cedars of Lebanon, which he hath planted; 17 Where the birds make their nests: as for the stork, the fir trees are her house. 18 The high hills are a refuge for the wild goats; and the rocks for the conies. 19 He appointed the moon for seasons: the sun knoweth his going down. 20 Thou makest darkness, and it is night: wherein all the beasts of the forest do creep forth. 21 The young lions roar after their prey, and seek their meat from God. 22 The sun ariseth, they gather themselves together, and lay them down in their dens. 23 Man goeth forth unto his work and to his labour until the evening. 24 O LORD, how manifold are thy works! in wisdom hast thou made them all: the earth is full of thy riches. 25 So is this great and wide sea, wherein are things creeping innumerable, both small and great beasts. 26 There go the ships: there is that leviathan, whom thou hast made to play therein. 27 These wait all upon thee; that thou mayest give them their meat in due season. 28 That thou givest them they gather: thou openest thine hand, they are filled with good. 29 Thou hidest thy face, they are troubled: thou takest away their breath, they die, and return to their dust. 30 Thou sendest forth thy spirit, they are created: and thou renewest the face of the earth. 31 The glory of the LORD shall endure for ever: the LORD shall rejoice in his works. 32 He looketh on the earth, and it trembleth: he toucheth the hills, and they smoke. 33 I will sing unto the LORD as long as I live: I will sing praise to my God while I have my being. 34 My meditation of him shall be sweet: I will be glad in the LORD. 35 Let the sinners be consumed out of the earth, and let the wicked be no more. Bless thou the LORD, O my soul. Praise ye the LORD.

I know this is a more extended portion of scripture, but I just wanted you to see and soak in His power and omnipotence. He laid the foundation of the earth with just His words (Psalm 33:9). I have tried to get a foundation poured in my back yard for five months, and between the contractor, engineer, the city red-tape, and my inexperience, I still have no foundation. God grows grass to feed the animals of the field, provides lodging for the goats in the mountains, and is the caretaker of every lion. He created day and night. He not only holds the controller for the earth, but unlike my children and me, He knows how to use every button on the remote. Everything we see displays some part of God’s power.

Ultimately, you want what will bring you most joy, pleasure, and fulfillment in life. Only by trusting God’s omnipotence will we experience the greatest happiness possible. Because He is omnipotent, we know that all things work together for good to them that love God, to them who are the called according to his purpose (Romans 8:28). God’s almighty power brings endless satisfaction (Psalm 16:11), earthly safety (Proverbs 18:10), and eternal salvation (Zephaniah 3:17) to everyone who believes in Him. An omnipotent God that was not loving, just, longsuffering, would be frightening, but because “the Judge of all the earth will do right” (Genesis 18:25), we can agree with the Psalmist who said, I will both lay me down in peace, and sleep: for thou, LORD, only makest me dwell in safety (Psalm 4:8).

When you think about God’s omnipotence, what is the first verse that comes to your mind? When has God displayed His power in your world?